Some accounts make Erinna a contemporary of Sappho

“Columns, and my Sirens, and you, sorrowful urn
Who holds Hades’ small portion of ash—
Say “hello” to those who walk by my grave,
Whether they happen to be citizens or from another town.

Tell them this too so they may know it:
this grave covered me when I was a bride,
My father used to call me Baukis and Tenos was my land
Tell them also that Erinna, my friend,
Etched this poem on my Tomb.”

“These outlines come from tender hands: noble Prometheus
There are people whose talent is near to yours!
Whoever drew this girl so truly
If he added a voice, she would be Agatharkhis entirely.”

“You lie there beneath Aphrodite’s golden ceiling,
Grapes, full with Dionysus’ drink.
Your mother, the vine, will no longer wrap her love branch around you
And protect your head beneath her sweet leaf.”

“Anigrian Nymphs, daughters of the river, you ambrosial
Creatures who always step on the depths with rosy feet.
Say hello to and preserve Kleonymos who set out for you goddesses
These wooden images beneath the pines.”

Nossis is one of the best attested woman poets from the ancient world. Don’t feel bad if you haven’t heard of her.

“Melinna herself is here. Look how her pure face
Seems to glance gently at me.
How faithfully she looks like her mother in every way.
Whenever children equal their parents it is beautiful.”

“Stranger, if you sail to the city of beautiful dances, Mytilene,
The city which fed Sappho, the the Graces’ flower,
Tell them that the land of Lokris bore for the Muses
A woman her equal, by the name of Nossis. Go!”

“I expect that Aphrodite will be pleased to receive
As an offering from Samutha, the band that held her hair.
For it is well made and smells sweetly of nektar,
That very nektar she uses to anoint beautiful Adonis.”

“Let’s leave for the temple and go to see Aphrodite’s
Sculpture—how it is made so finely in gold.
Polyarkhis dedicated it after she earned great
wealth from the native glory of her body.”

Yesterday I posted some fragments from Nossis. Here are some more.

“Reverent Hera, who often comes down
From the sky to gaze upon your fragrant Lakinian home.
Take the linen robe which Theophilos, the daughter of Kleokha
Wove for you with the help of her noble daughter Nossis.”

“These weapons the Brettian men hurled down from their unlucky shoulders
As they were overcome by the hands of the fast-battling Lokrians.
They are dedicated here singing the Lokrians glory in the temple of the gods.
They don’t long at all for the hands of the cowards they abandoned.”

“Pass by me, give an honest laugh, and speak over me
A loving word. I am Rhintho from Syracuse,
A minor nightingale of the Muses. But from my tragic
Nonsense poems, I made my own ivy crown.”

“There is nothing sweeter than love: all other blessings
Take second place. I even spit honey from my mouth.
This is what Nossis says. Whomever Kypris has not kissed,
Does not understand her flowers, what kinds of things roses are.”

“This frame has the picture of Thaumareta. The painter
Caught the form and the age of the soft-glancing woman well.
Your house dog, the little puppy, would paw at you if she saw this,
Believing that she was looking down at the lady of her home.”

“My shining star, you gaze upon the stars yourself;
I wish that I were the sky, so that I could look at you with many eyes.”

“I have a lover from Kolophôn named Arkheanassa—
Potent lust rests even on her wrinkles
Poor wretches who met her during the first sailing
Of her youth—what a conflagration you passed through!”

The Greek Anth. 7.217 attributes a slightly different version to Asclepiades

“I have Arkheanassa, a lover from Kolophôn—
Sweet lust rests even on her wrinkles
Oh lovers who harvested the fruit of her youth
At first bloom—what a conflagration you passed through!”

“When kissing Agathon I felt my soul at my lips.
The wretch—for she was trying to cross between us.”

According to Aelian, Plato’s career as a poet was cut short (Varia Historia 2.30); but note, though there is mention of epic and tragedy, the anecdote makes no claims for lyric and elegy:

The poet Paulus Silentiarius (6th C. CE) complains to a confidant that his beloved, Sappho, is something of a cold fish.

Meanwhile, Sappho (c.6th C. BCE) admits to the same confidant that actually, she’s overcome with lust whenever Paulus is around:

Soft are Sappho’s kisses!
Soft her embracing snow-white arms!
All of her body, soft.

But her heart, it’s steely and unyielding–
See how she loves to kiss, yet minds her chastity.

Who could bear this?
Perhaps, just perhaps, the stoical man
Who could easily bear Tantalus’s thirst.

Again, limb-liberating Lust rattles me.
He’s a beast both sweet and bitter
And cannot be fought off.

These short poems are structured as wishes, and each is creepy in its own way.

The two taken from Campbell’s edition of anonymous Greek songs are presumed to be sympotic drinking songs (scolia), and the final poem is an Hellenistic epigram.

If only we could know what manner of man
each man was–by opening his chest,
seeing his heart, then sealing it up again–
We would know a dear man by his honest heart.

If only I were a fine lyre made of ivory
and pretty boys carried me
in the Dionysian chorus.

If only I were the wind
and you, walking in the sun with breasts exposed,
could feel my gusts.

“Stranger passing by the humble grave of Anakreon,
If my books were of any use to you,
Pour some wine on my ashes, pour it out in drops
So that my bones can smile, refreshed a bit by wine,
so I, who loved the shouting raves of Dionysus,
so I, who was a partner of music matched to drink,
may not lie dead apart from Bacchus in this place below,
the land which all the race of mortals one day must know.”

“Hades’ hall is horrifying
And the passage there is hard.
Worse: it is decided that
who ventures there does not return.”

“I don’t love the man who while drinking next to a full cup
Talks about conflicts and lamentable war.
But whoever mixes the shining gifts of Aphrodite and the Muses
Let him keep in mind loving, good cheer.”

This last fragment recalls (the much later) Carmen 85 of Catullus:

“I hate and I love: you might ask why I do this–
I don’t know, but I see it happen and it’s killing me.

In the vast and boring literature on Samuel von Pufendorf (1632-1694), everything the man had to say on the natural law is picked apart, but you’d be hard pressed to find a single discussion of his verdict on male sexual potency:

Pufendorf always took into consideration the views of ancient writers, but he must have missed the contradicting account offered by Hellenistic poet Rufinus:

How often, Thaleia, I’ve wanted to take you in the night
And gorge my spirit on hot-blooded lust.
But now you’re up against me, your sweet body naked,
And I’m limp, my spent ‘limb’ falling asleep.
Sad excuse for a heart, what’s happened?
Get up! Don’t flop!
You’ll have to search for another
When, right here, is some super good luck.

*The Pufendorf quotation is from his De Officio Hominis & Civis Juxta Legem Naturalem (“On the Duty of Man and Citizen According to the Natural Law”).

“Hera twisted by the beauty of Ganymede once spoke
As she suffered the heart-rending stab of jealousy in her heart:
“Troy ignited a male fire for Zeus—and so I will send
A fire at Troy, a pain bearing Paris.
No eagle will come to Troy again, but vultures
Will go to the feast when the Greeks get the spoils for their toils.”

Sometimes an Eagle Does show up in stories of Zeus and Ganymede.

“Go to bright heaven, go carrying the child,
Eagle, keep your twin wings spread wide.
Go holding gentle Ganymede and do not drop
Zeus’ wine-bearer of the sweetest cups.
But be careful not to bloody him with your clawed feet
So that Zeus, upset, won’t hurt you.” 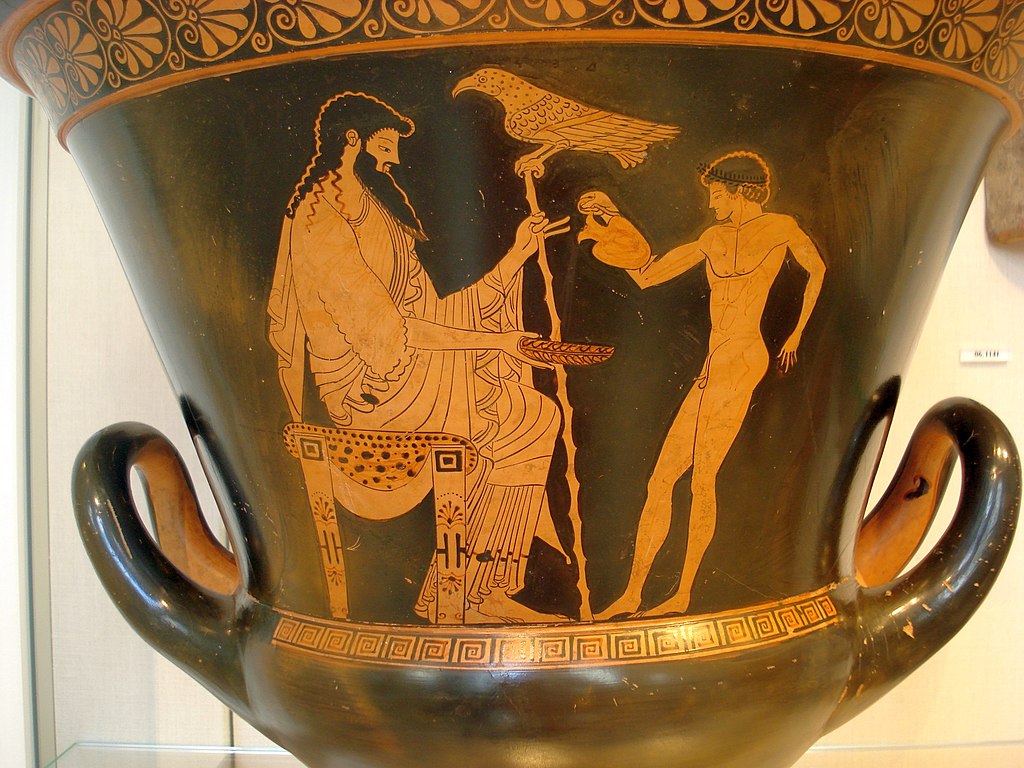