“Caesar left certain of his friends the impression that he did not want or desire to live longer because  of his worsening health. This is why he ignored what the omens warned and what his friends revealed. Others believe that he dismissed the Spanish guards who accompanied him with swords because he was confident in the Senate’s recent decree and their sworn oath. Others report that he preferred to face the plots that threatened him at once rather than cower before them. There are those who assert that he used to say that his safety should be of more importance to the state than to himself: he had acquired an abundance of power and glory already, but the state, should anything happen to him, would have no rest and would suffer civil war in a worse condition than before.

The following is generally held to be the case, however: his manner of death was scarcely against his desire. For, when he read Xenophon’s account of how in the final days of illness Cyrus gave the plans for his own funeral, Caesar expressed disdain for so slow a death and wished that his own would be sudden and fast. And on the day before he died during dinner conversation at the home of Marcus Lepidus on the topic of the most agreeable end to life, Caesar said he preferred one that was sudden and unexpected.” 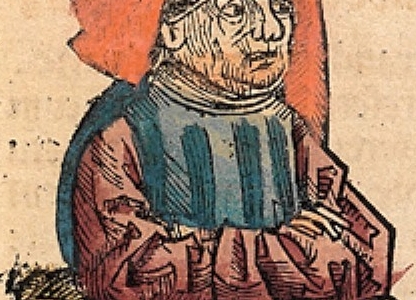 Another text tentatively attributed to Caesar was discovered along with the fragments of the De Silvis and an appendix to De Bello Gallico. This is almost surely the lost Bellum Incivile.

Almost one hundred Democrats who were seeking the consulship gathered to fight among themselves until only one person was left standing. The young candidates kept begging the old man, who was holding power for too long, to pass the torch of power to them and that his time was up; but the old man said that the torch could not be wrested from his grip because it was stuck to his hands like pearls to a shell.

While some of the young candidates were trying to take the torch from the old man’s clutches, two other men spoke Spanish words badly and a certain woman was purifying the republic with the torch’s smoke while saying over and over again that love, not plans, will save us.

While this was going on, Manicula warned Puppet Master not to interfere with the matters of the republic, but he said these things with a hatred for dignity in such a way as to embolden Puppet Master. For Manicula even said Puppet Master was an ally and very close friend, although everyone else had considered him an enemy of the people for a long time.

This is a kind of argument deduced from connected notions: “If the highest praise must be given to piety, then you should be moved when you see Quintus Metellus grieving so dutifully”. And, as for a deduction from generalities, “if magistrates owe their power to the Roman people, then why impeach Norbanus when he depends on the will of the citizenry?”

“Others claim that he feared being compelled to provide a defense for the things he had done in his first consulate against auspices, laws, and legislative actions. For Marcus Cato often announced with an oath that he would impeach Caesar by name, as soon as he dismissed his army.”

“They impeach him voluntarily and they separate him
From his good fortune and all his wealth,
A man isolated, bereft, depressed and tortured” The following text of unknown authorship was recovered along with new fragments of Caesar’s lost Bellum Incivile and several pamphlets on ancient Roman fashion and etiquette.

As dawn rose, a young man of remarkable piety came down from heaven onto the gloomy earth for the sake of saving the republic. Since his name could not be pronounced by any mortal, he was called Mayor Pete. It was such a great miracle that some believed that he was not just similar to a god, but that he was an actual god; others believed that the 44th president had adopted him as his white son.

Many wonders and signs declared his divinity. His spouse, whose name was Mayor Pete’s Husband, was a teacher of the highest character whom students loved and respected as an example to emulate;* he was a faithful friend to two dogs, Buddy and Truman; he knew 17 languages which, they said, he was able to speak perfectly inside of a year whenever he wanted to help refugees, read a book in another language, or make a friend from another country; he also knew by heart the names of all the people who lived in the republic; and, he glows with a golden light as he helps the less fortunate. For these reasons everyone began to worship and venerate him as they begged the gods, “Do not prevent this man from rescuing our world in chaos.”

*It is thought that Quintilian wrote his treatise on education after reading notes taken during a classroom observation of Mayor Pete’s Husband.

This leaflet was found in the pocket of an article of clothing thought to be worn by Julius Caesar in his leisure time. The garment was discovered centuries ago, but its numerous pockets weren’t completely emptied until recently. It is thought the author could be an associate of the person who wrote De Imaginibus Verendorum. Edited by Dani Bostick.

Once they have children, men consider whether it is proper to set aside the toga and wear a new kind of clothing. This kind of clothing is called “cargo shorts” because they can carry much cargo. I wrote this little pamphlet so that you might understand everything about them.

Although the gods give men two hands, men desire eight hands so that they can carry as many things as possible. Driven by an insatiable desire to carry everything, a clever man once invented cargo shorts, when, having set aside concern for aesthetics, he attached as many pockets as possible to shapeless shorts. In this way, he made an unfashionable type of clothing even more unfashionable. But because of the pockets, cargo shorts are as useful as they are unattractive. For with his hands free, he was able to carry many things more easily.

Now I will answer all of your questions:

Can’t maps be kept in cargo shorts? No! You see, a man who wears cargo shorts always knows where he is and how to get to every place.

Can’t feminine property be kept in cargo shorts? When a wife asks her husband to hold on to feminine things, the man responds to her either that he does not have enough pockets or that all of the pockets are already full of other things, even if his pockets are completely empty.

Do they come in Tyrian purple? That is a violation of divine law! They can only be the color of dirt or stone.

Can’t they be made to fit properly? No! As it is said: Function over form! A comfortable body through shapeless clothes! Covering only part of the knee! Always socks with sandals!

Is that a javelin in your pocket? No! I am just happy to see you.*

*This last question was written in a different style of handwriting.

** This piece is satire.

A pamphlet was recently discovered along with the fragments of Bellum Incivile, a text tentatively attributed to Caesar. De Imaginibus Verendorum was almost certainly not written by Caesar, but was very possibly distributed to his troops.* Edited by Dani Bostick

“All people arrive into the world nude on the day of their birth, but many men as adults want to show off their unclothed private parts very often. They have a frightful custom of making images of their private parts, which can also be called dick pics, penis pictures, and members at mast, and sending them to women. These men are very different with respect to dignity and virtue from men who are in the habit of keeping their private parts covered unless someone says she wants to see them.

When the eyes of women are too far away or when there is a concern about breaking the law– for it is not OK to expose bystanders to penises when you are outside– inflamed by a desire to show his private parts, a man of this kind creates an image of them, which you would believe to be real, but would not in any way want to look at. He marvels at this, but it is not enough for him to see it. Even if women have already said they do not want to see any private parts, he thinks the image must be seen by as many women as possible.

For this reason the man sends this image to one woman, then to two women, then to five; then to another ten. “Careful,” he says to himself as he sends the picture through the ether. “Don’t send it to your mom or sisters by accident.” In this way, he believes he is operating with restraint and modesty.

At last, many women see the image of the private parts and seeing it, they are horrified, but the man, proud of his private parts and the picture of them, happily awaits the replies of the women. “How lucky these women are! How beautiful are my private parts!” But the women do not respond.

Although he is happy with himself, he lacks friends and dignity, but he does not want to change because he thinks he is the best.  Catullus once said, “Each of us has a flaw, but we cannot see what is in our own backpacks.”

I will make this very clear to you. It is the greatest flaw to send pictures of your private parts to women who absolutely do not want to see them.

Men, having read these words, may you recognize this flaw and stop it!

[*N.B. This is satire. This Latin is not from antiquity] 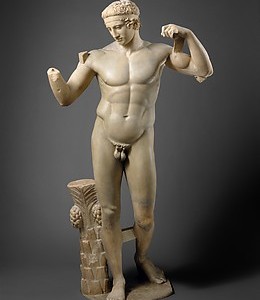 Another text tentatively attributed to Caesar was discovered along with the fragments of the De Silvis and an appendix to De Bello Gallico. This is almost surely from the lost Bellum Incivile.

6.3 Whenever Manicula found himself in the midst of scandal, money was often paid by his associate D. Pecker to buy off accusations. For even prior to his nefarious consulship, Manicula had associated with people of such a kind and conducted his business in such a way that many reports of his offences and delinquency became widespread. For this reason, D. Pecker made many payments to conceal Manicula’s misdeeds. It is said that evidence of them is kept under lock and key.

6.8 After D. Pecker obtained images of the intimate regions of a wealthy man named J. Bezos, who made his fortune doing business in the cloud, he threatened to publish them in order to silence Bezos who had discovered information unfavorable to Pecker’s company.  It ended up, however, that D. Pecker’s plan seemed more shameful than the images themselves.