“Even though the Roman people and the senate offered me the dictatorship when I was absent and there too, during the consulship of Marcellus and Lucius Arruntius, I did not accept it. I did not refuse the control of the grain supply when there was the most severe scarcity. I did this in such a way that after a few days I relieved the people of the fear and peril they found themselves at my own cost. I also did not accept the consulship when it was offered to me for a year or forever.”

“For my part, whatever I read, whatever I think, I store it in the storehouses of my mind as if I were about to bring it forth for the use of human activity. And since I think that it is too difficult to excerpt everything separately, I put many things into a commentary, or write it separately on a little sheet. But in the margin, I make compendious notes, separate from the text, of everything which seems worth of some notice. If any of these things really stand out as particularly capital or excellent, I place them in the peak (or one might say the crown) of the margin. From this practice springs some utility, allowing me to reconsider several volumes within the space of an hour and a half. I once tried to wrangle Pliny’s Natural History into an epitome, since I always burned with wondrous desire for that author. But undoubtedly I acted the fool, because I ended up copying out almost everything in Pliny.”

“To be a sykophant: To rub sexually. That’s how Plato and Menander use it.”

Browse the Suda on the Scaife Viewer. Or, check out translation and commentary on the Suda Online

More from the Suda

“To be a sykophant: to falsely accuse someone. They the Athenians called it this at the time when a fig-plant was first discovered and they were stopping the export of figs for this reason. Those people who reported that figs were being exported were called “sykophants” [lit. “fig speakers”]. Over time, anyone who accused people in a super annoying manner were named in this way.

Aristophanes writes “these things are small and indigenous” since being a sykophant is a native characteristic of Athenians. Aelian adds “he alleged [sukophantei] that he god was negligent. For these reasons plagues and famine over came the Himerians’ city.”

Even more from the Suda

“Sykophant: When there was a famine in Attica, some people were gathering figs in secrete which had been promised to the gods. After this, when times were good again. Some people were prosecuting these men. This is where the term developed. Look at the term “fig squeezer” too.

“Sykophant: The devil. For he made a false accusation of god, claimed that he prevented [humans] from having a share of the tree [of knowledge]. He also spoke slanderously against Job: “Does Job worship god with no return?”

For the story of Solon and the sycophants, see Plutarch’s Life of Solon on the Scaife Viewer. The sense of flatterer or parasite is somewhat present in the ancient Greek but becomes more prominent in English usage. The negative use can be seen in the fragment from Alexis’ The Poet (fr. 187) preserved in Athenaeus:

The name of sykophant is not rightly
Given to corrupted men.
For it should have been right for any man
Who was good and sweet to have figs
Attached to him to reveal his character.
But it fills us with confusion on why something sweet
Has been attached to someone bad. 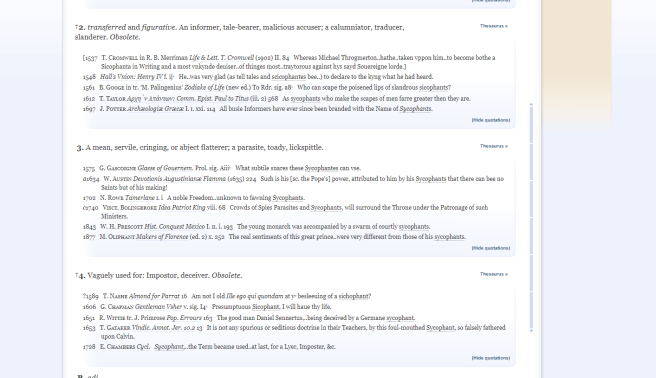 “Faith in his sense of principle provided was the foundation of his great good will and fame. For Pompey the Great was not expected—should he overcome Caesar—to put down his power in deference to the laws, but people thought he would keep his political control, smooth-talking the people with the name of consulship or dictator or some other more palatable office.

Now it was imagined that Cassius, an eager and emotional man often distracted from justice by profit, was pursuing war and adventure to create some dynasty for himself rather than freedom for his fellow citizens. For in an earlier time than that, people like Cinna, Marius, and Carbo, even though they made their own country their victory prize and source for spoils, they warred by their own confession for tyranny alone.”

You may ask me “how are you handling these things?” By god, pretty damn well and I love myself for doing so. My friend, we have not only lost the marrow and blood of a just state, but we’ve lost its decoration and facade too.

There is no Republic where I might find happiness or comfort. You may ask, “Can you really take this well?” Yes. That’s it. I recall how well the state thrived when I was governing it and the gratitude it gave me. No grief touches me at all at seeing one person capable of everything. Those who were upset that I had any power are wrecked by it.

No, I have many things to bring me solace. But I do not move from where I am, instead I return to that way of life which is most natural, to my books and my research.”

“Politically, the weakness of the argument has always been that those who choose the lesser evil forget very quickly that they chose evil.”

Call witnesses or live in a dictatorship.…

“We have no small hope in our elections, but it is still uncertain. There is some suspicion of a dictatorship. We have peace in public but it is the calm of an old and tired state, not one giving consent.”

“Indeed, just as frightened horses raise their necks up high, in the same way all those devotees of empty glory raise themselves above everything else, above cities, laws, ancestral custom, and the affairs of individual citizens. As they move from demagoguery to dictatorship, they subdue some of their neighbors as they try to make themselves superior and upright–and then they plan to enslave however so many minds remain naturally free and unenslaved.”

“So, the dictatorship, as has been reported, was pretty much the same thing as a kingship, except that the dictator could not go on horseback…”

“This is no minor stink of dictatorship…”

“The dividing line between those who want to think and therefore have to judge by themselves, and those who do not, strikes across all social and cultural or educational differences. In this respect, the total moral collapse of respectable society during the Hitler regime may teach us that under such circumstances those who cherish values and hold fast to moral norms and standards are not reliable: we now know that moral norms and standards can be changed overnight, and that all that then will be left is the mere habit of holding fast to something. Much more reliable will be the doubters and skeptics, not because skepticism is good or doubting wholesome, but because they are used to examine things and to make up their own minds. Best of all will be those who know only one thing for certain: that whatever else happens, as long as we live we shall have to live together with ourselves.”

“Tyrannos: The poets before the Trojan War used to name kings (basileis) tyrants, but later during the time of Archilochus, this word was transferred to the Greeks in general, just as the sophist Hippias records. Homer, at least, calls the most lawless man of all, Ekhetos, a king, not a tyrant. Tyrant is a a name that derives from the Tyrrenians because these men were quite severe pirates.* None of the other poets uses the name tyrant in any of their works. But Aristotle in the Constitution of the Cumaeans says that tyrants were once called aisumnêtai, because this name is a bit of a euphemism.”

*According to Louise Hitchcock and Aren Maeir (“Yo-ho, Yo-ho: A Seren’s Life For me.” World Archaeology 46:4, 624-640) the Philistines used the word seren to mean leader; this word may have been related to Hittite tarwanis and was possibly circulated by the ‘sea peoples’. Greek tyrannos may have developed from this. Chaintraine notes that the etymology of turannos is unclear but that it may be related to Etruscan turan or Hittite tarwana.

“This is likely formed from Tursennians*. Or it derives from Gyges who was from a Turran city in Lykia, and he was the first one who was a tyrant. Others claim it is from truô [“to distress, wear out, afflict”], that it was truanos and that the rho and nu switched places through pleonasm. Ancients used to use the word Turannos for kings. There was a time when they used a call the tyrant ‘king’.

*A name for Etruscans

“An aisiomêtês is one who has proper plans. A tyrant is the opposite.”

What’s the difference between a king and a tyrant?

“For, a king must truly do noble things. One who does evil, he’s a tyrant.”

“Tyranny: It differs from a kingship and a tyrant is different from a king. For a kingship is something that exercises power according the law. But a tyranny is a force without reason, following its own law. A king is someone who rules according to just laws; but a tyrant, who can never rule justly nor without the boundaries of the law, he steps outside of the laws.”

Tyrannos: from some tyrant, the one who first ruled badly, from the city of Tyre. It means two things: a kind and the man as a tyrant.”

“Citizens guard their kings with arms; foreigners protect tyrants. This is because kings rule according to the law and with willing citizens while tyrants rule the unwilling. As a result, kings have guards from their subjects and tyrants keep guards against them.”

The god, being a lover of humans, first did away with the mules and the dogs and the other unreasoning beasts, so that, leading the Greeks to fear through their example, he could turn their minds to piety. Or it may be that asses and dogs have a more powerful sense of smell. For dogs often perceive animals from the smell of their tracks, while quite often mules who have been left behind by people have found their routes from their sense of smell.