Among the friends of Cosimo, to whose personal influence at Florence the Revival of Learning owed a vigorous impulse, Niccolo de’ Niccoli claims our earliest attention.The part he took in promoting Greek studies has been already noticed, and we have seen that his private library formed the nucleus of the Marcian collection. Of the eight hundred volumes bequeathed to his executors, the majority had been transcribed by his own hand; for he was assiduous in this labour, and plumed himself upon his skill in cursive as well as printed character. His whole fortune was expended long before his death in buying manuscripts or procuring copies from a distance. ‘If he heard of any book in Greek or Latin not to be had in Florence, he spared no cost in getting it; the number of the Latin books which Florence owes entirely to his generosity cannot be reckoned.

Great, therefore, must have been the transports of delight with which he welcomed on one occasion a manuscript containing seven tragedies of Sophocles, six of Æschylus, and the ‘Argonautica’ of Apollonius Rhodius. Nor was he only eager in collecting for his own use. He lent his books so freely that, at the moment of his death, two hundred volumes were out on loan and, when it seemed that Boccaccio’s library would perish from neglect, at his own cost he provided substantial wooden cases for it in the Convent of S. Spirito.

We must not, however, conclude that Niccolo was a mere copyist and collector. On the contrary, he made a point of collating the several MSS. of an author on whose text he was engaged, removed obvious errors, and suggested emendations, helping thus to lay the foundations of modern criticism. His judgment in matters of style was so highly valued that it was usual for scholars to submit their essays to his eyes before they ventured upon publication. Thus Leonardo Bruni sent him his ‘Life of Cicero,’ calling him ‘the censor of the Latin tongue.’ Notwithstanding his fine sense of language, Niccolo never appeared before the world of letters as an author. His enemies made the most of this reluctance, averring that he knew his own ineptitude, while his friends referred his silence to an exquisite fastidiousness of taste. It may have been that he remembered the Tacitean epigram on Galba—omnium consensu capax imperii nisi imperâsset—and applied it to himself.

Certainly his reserve, in an age noteworthy for arrogant display, has tended to confer on him distinction. The position he occupied at Florence was that of a literary dictator. All who needed his assistance and advice were received with urbanity. He threw his house open to young men of parts, engaged in disputations with the curious, and provided the ill-educated with teachers. Foreigners from all parts of Italy and Europe paid him visits: ‘the strangers who came to Florence at that time, if they missed the opportunity of seeing him at home, thought they had not been in Florence.’ The house where he lived was worthy of his refined taste and cultivated judgment; for he had formed a museum of antiquities—inscriptions, marbles, coins, vases, and engraved gems. There he not only received students and strangers, but conversed with sculptors and painters, discussing their inventions as freely as he criticised the essays of the scholars. It is probable that the classicism of Brunelleschi and Donatello, both of whom were among his intimate friends, may be due in part at least to his discourses on the manner of the ancients. Pliny, we know, was one of his favourite authors; for, having heard that a complete codex of the ‘Natural Histories’ existed at Lübeck, he left no stone unturned till it had been transferred to Florence. 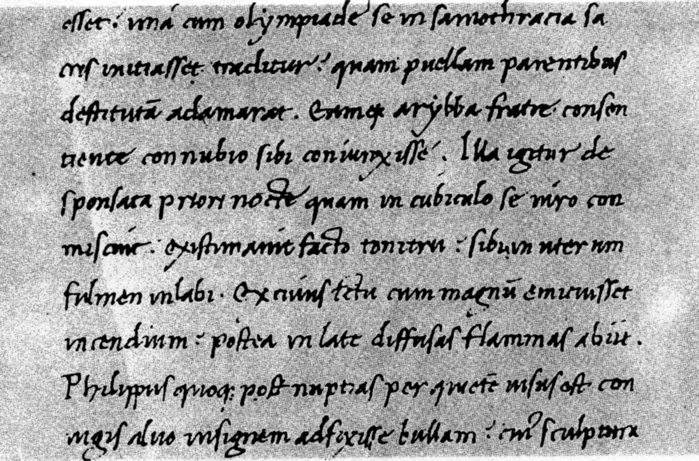