“They claim that after some time Themis was given by Gaia whatever he share was and then that Apollo received that as a gift from Themis. They say that Apollo gave to Poseidon the portion of land called Kalauria which is near Troizen as an exchange-gift for the oracle. I have also heard that men who were shepherding their flocks chanced upon the oracle and were inspired by the mist and then acted as prophets of Apollo. The account with the most adherents is the story of Phêmonoê, that she was the first prophet of the god and the first person who sang hexameters.

Boiô, a local woman who created a Hymn for the Delphians, used to say that people who visited from the Hyperboreans along with others and Olên created the oracle for the god and that he, Olên, was the first to give prophecies and to sing a hexameter.

Boiô composed these verses: “Here in fact, they built the oracle of good memory / the children of the Hyperboreans, Pagasos and shining Aguieus.”

Once she has named other Hyperboreans, near the end of the hymn she mentioned Olên: “And Olên who was the first prophet of Phoibos / and the first to make the song of ancient epic verses.” There is in common memory no mention of him at all; all that is left is the prophecy of women only.” 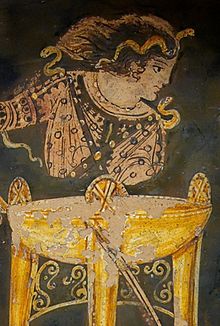