At his birth in 1662 rather more than two centuries had elapsed since the beginning of the movement which was to restore ancient literature to the modern world. During the earlier of these two centuries — from about 1450 to  1550 — the chief seat of the revival had been Italy, which thus retained by a new title that intellectual primacy of Europe which had seemed on the point of passing from the lands of the south. Latin literature engrossed the early Italian scholars, who regarded themselves as literary heirs of Rome, restored to their rights after ages of dispossession. The beauty of classical form came as a surprise and a delight to these children of the middle age; they admired and enjoyed; they could not criticise. The more rhetorical parts of silver Latinity pleased them best; a preference natural to the Italian genius. And meanwhile Greek studies had remained in the background. The purest and most perfect examples of form, — those which Greek literature affords, — were not present to the mind of the earlier Renaissance. Transalpine students resorted to Italy as for initiation into sacred mysteries. The highest eminence in classical scholarship was regarded as a birthright of Italians. The small circle of immortals which included Poggio and Politian admitted only one foreigner, Erasmus, whose cosmopolitan tone gave no wound to the national susceptibility of Italians, and whose conception, though larger than theirs, rested on the same basis. That basis was the imitatio veterum, the literary reproduction of ancient form. Erasmus was nearer than any of his predecessors or contemporaries to the idea of a critical philology. His natural gifts for it are sufficiently manifest. But his want of critical method, and of the sense which requires it, appears in his edition of the Greek Testament.

In the second half of the sixteenth century a new period is opened by a Frenchman of Italian origin, Joseph Scaliger. Hitherto scholarship had been busy with the form of classical literature. The new effort is to comprehend the matter. By his Latin compositions and translations Scaliger is connected with the Italian age of Latin stylists. But his most serious and characteristic work was the endeavour to frame a critical chronology of the ancient world. He was peculiarly well-fitted to effect a transition from the old to the new aim, because his industry could not be reproached with dulness. ‘People had thought that aesthetic pleasure could be purchased only at the cost of criticism,’ says Bernays; ‘now they saw the critical workshop itself lit up with the glow of artistic inspiration.’ A different praise belongs to Scaliger’s great and indefatigable contemporary, Isaac Casaubon. His groans over Athenaeus, which sometimes reverberate in the brilliant and faithful pages of Mr Pattison, appear to warrant Casaubon’s comparison of his toils to the labours of penal servitude (‘catenaii in ergastulo labores‘). Bernhardy defines the merit of Casaubon as that of having been the first to popularise a connected knowledge of ancient life and manners. Two things had now been done. The charm of Latin style had been appreciated. The contents of ancient literature, both Latin and Greek, had been surveyed, and partly registered.

Bentley approached ancient literature on the side which had been chiefly cultivated in the age nearest to his own. When we first find him at work, under Stillingfleet’s roof, or in the libraries of Oxford, he is evidently less occupied with the form than with the matter. He reads extensively, making indexes for his own use; he seeks to possess the contents of the classical authors, whether already printed or accessible only in manuscript. An incident told by Cumberland is suggestive. Bentley was talking one day with his favourite daughter, when she hinted a regret that he had devoted so much of his time to criticism, rather than to original composition. He acknowledged the justice of the remark. ‘But the wit and genius of those old heathens,’ he said, ‘beguiled me: and as I despaired of raising myself up to their standard upon fair ground, I thought the only chance I had of looking over their heads was to get upon their shoulders. ‘ These are the words of a man who had turned to ancient literature in the spirit of Scaliger rather than in that of the Italian Latinists. 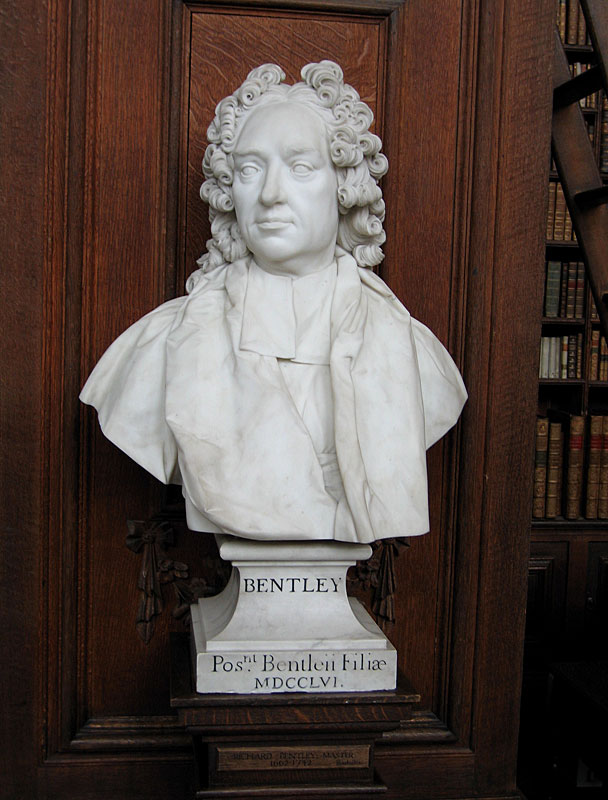