Epitaphios: A speech performed annually in honor of those who have died in war. The most famous that remains is Thucydides’ version of Perikles’ funeral oration (2.35-46).

“Many of those who have spoken here already praised the one who made this speech law, that it is a noble thing to speak over the burials of those who died in war.  But honors paid in deeds for deeds performed by good men would seem to be sufficient to me—the acts which you see performed now by the public at this burial. The virtues of many should not be risked by entrusting them to the good or poor speaking of one man alone. For it is hard to speak reasonably on something upon which faith in the truth is only partly firm.

For the one who knows the story and is a well-informed listener may take it rather harshly compared to what he wants, knows and believes should be said. Someone inexperienced of the events may find fault because of envy if he hears anything behind his own nature. For praise spoken of others is endurable only to the point that each person believes that he is capable of achieving what he has heard. People envy and disbelieve those who surpass them.

But since it was believed noble to do these things by our forefathers, it is right that I follow the law and try as much as possible to fulfill each of your desire and expectation.”

“If I believed it were possible, men in attendance, to make clear in this speech the virtue of the men who lie buried here, I would complain to those who summoned me to speak with only a few days’ notice. But since the whole of time would not be enough for all men together to prepare a speech worthy of these deeds, for this reason the city seems to take pity on those who speak here in making their assignment late–since it knows that the speakers will have the pardon of their audiences.

Yet, though my speech is about those men, my struggle is not with their deeds but with those who have spoken for them before. For their virtue has provided such an abundance both in those able to compose poetry and those who are selected to speak, that even though many fine things have been said about them by my predecessors and many other things have been omitted by them, it is still the case that enough remains for those who follow them to say. For there is no land or sea unknown by these men; and in every direction among all peoples even those who suffered at their hands sing their praises.

First, therefore, I will recite the ancient trials of our forefathers, procuring for us a reminder from their fame. For it is right for all men to remember them, praising them in songs and recalling their names in the praise of good men, honoring them on occasions such as this, and teaching the living through the deeds of the dead.”

In Plato’s Menexenus (236dff), Socrates recites an epitaphios given by Aspasia:

“In deed, these men have what is required for them materially—now that they have obtained it, they proceed along the fated path: they have been carried out in common by the city and in private by their families.  But in speech it is necessary to pay out the remaining rite which custom assigns us. For, when deeds have been performed well, memory and glory come from the audience through a speech nobly spoken. Whoever will praise the dead rightly and advise the living favorably needs this type of speech: calling upon progeny and brothers to imitate their virtue and assuaging their parents and any elders they have left behind.

What sort of speech would this seem like for us? Should we begin correctly by praising them as good men who while alive impressed their friends with their virtue and who exchanged their death for the safety of the survivors? It seems right to me to praise them in the order of nature, how they became good men. They were good men because they came from good men. So first, let us praise their families, then the way they were raised and trained. And then we will show the character of their deeds, how they proved themselves to be noble and worthy.”

“Since it seems right to the state to bury those lying in this grave publicly because they proved themselves noble in war and it has been assigned to me to deliver the customary speech on their behalf, I immediately began to examine how others have crafted the appropriate praise. But while I was considering and examining this, I realized that speaking worthily of the dead is one of those things that is impossible for men. For because they have abandoned that desire to live that is natural to all men and they have decided to die well rather than continue living and watch Greece fare badly, how have they not left behind an accomplishment beyond the expression of any speech?

But, nevertheless, it seems right to me to speak the way those who have spoken here before. How serious our city is about those who have died in war is can be seen from other affairs and especially from this law by which someone is selected who will speak over the public burial. For, since we know that among noble men the possession of money and the acquisition of pleasures in life are dismissed and that they have a great desire for virtue and praise, so that they might gain these things especially, we have thought it right to honor them so that what good repute they acquired while living, might also be granted to them even now that they are dead.

If I saw that courage alone was sufficient of those traits that lead to virtue, I would praise that and forget the rest of my speech. But because it is true that they were born nobly, educated prudently, and lived honorably—all reasons they were eager to act rightly—I would be ashamed if I moved on without saying something about these things. So I will start from the beginning of their ancestry.” 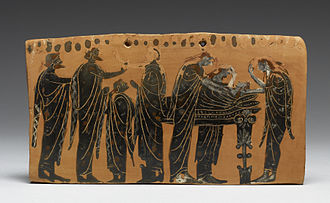 “The whole earth is the tomb of heroes: their epitaph shines out not just for local attention, but their unwritten memory lives on in the esteem of each man more than on any monument.”

“Since our mind possesses a natural love of knowledge and curiosity, shouldn’t we rebuke people who use it for unworthy things instead of noble and useful pursuits?”

“The whole earth is our heroes’ grave: their epitaph is written not just for local notice, but an unwritten memory lives on in the esteem of each man more than any one monument.”

“Since the mind loves knowledge and is curious by nature, shouldn’t we rebuke those who care about unworthy things instead of noble and useful pursuits?”

“Often and quite contrarily, we look down on a laborer while delighting in his work”