“Shit.
Nothing is credible, not a good reputation
Nor that one who is lucky will not do badly in the end.
The gods churn these waters up back and forth
Mixing in confusion so that we worship them
In our ignorance. But why mourn at all?
It has no effect on our sufferings to come.”

“You haven’t paid up, but perhaps you’ll pay soon.
Like a man who has fallen into water with no harbor
You’ll fall far from your heart’s desire
And lose your life. The meeting place
Of debt to Justice and to the gods
Is a terrible, terrible place.”

“Agamemnon, it’s not right for people
To possess tongues stronger than deeds.

If someone has done good things, then they ought to speak well
If they do evil things, well, their words are rotten too,
And they are incapable of ever speaking of injustice well.

Wise are those who have become masters of precise speech!
But even they cannot be wise all the way to the end.
They all die terribly. There’s no escape from that.”

Check out these readings from Hecuba

“Sail following the stream, sail following fate,
Don’t set the prow of your life
Against the waves, sailing against fortune.”

“Don’t believe that anyone who is lucky is blessed
Before they’re dead.”

“Any mortal is a fool who takes some pleasure
From imagining their good luck is safe: in its turns
Fortune’s like a crazed person leaping this way one day
And then another, no one ever keeps the same good luck.”

“I imagine it makes no difference to the dead
If they receive some rich funeral.
This is the source of silly pride for the living.”

“Will I ever lift my white foot
As I dance along
In the all night chorus—
Shaking my head at the dewy sky
Like the fawn who plays
In a meadow’s pale pleasures
When she has fled the frightful hunt
Beyond the well-woven nets of the guard—
With a holler, the hunter
Recalls the rush of his hounds
And she leaps
With the swift-raced lust of the winds
Across the riverbounded plain,
Taking pleasure in the places free
Of mortals and in the tender shoots
Of the shadow grove?

What’s cleverness for? Is there any nobler prize
Mortals can receive from the gods
Than to hold your hand over the heads
Of your enemies?
Whatever is noble is always dear.

Scarcely, but still surely,
The divine moves its strength
It brings mortals low
When they honor foolishness
And do not worship the gods
Because of some insane belief
They skillfully hide
The long step of time
As they hunt down the irreverent.
For it is never right
To think or practice stronger
Than the laws.
For it is a light price
To believe that these have strength—
Whatever the divine force truly is
And whatever has been customary for so long,
This will always be, by nature.

What’s cleverness for? Is there any nobler prize
Mortals can receive from the gods
Than to hold your hand over the heads
Of your enemies?
Whatever is noble is always dear.

Whoever has a happy life to-day,
I consider fortunate.

“Please remember that the person you call your slave rose from the same seeds, enjoys the same sky and equally breathes, lives and dies! You could see him just as much as a free man as a slave. Because of the slaughter in the time of Marius, fortune struck down many born to high station, taking the trail to the senate through the army—one of these it made a shepherd, another an overseer of a cottage. Despise now the fortune of a person whose place you may take even as you look down on them!

I don’t want to get involved in a big controversy and argue about the treatment of slaves toward whom we are most arrogant, cruel, and offensive. But this is the sum of my guidance: deal with your inferior the way you wish your superior would deal with you. However many times it pops in your mind to consider how much is right for you regarding your slave, let it also occur that this is permitted to your master regarding you. “But I have no master” you say. Your age is still good. Don’t you know how old Hecuba was when she began to serve, or Croeseus, or Darius’ mother, or Plato and Diogenes?”

Seneca seems to be channeling a rather ancient Greco-Roman idea that slavery is an aspect of chance rather than culture and social structure. But there is a more insidious side to this (or several hundred more insidious sides). One that has been disturbing me lately is Odysseus’ response to Eumaios’ life story. After Eumaios has described how he was kidnapped as a small child and sold to Laertes, Odysseus tries to tell him it could be worse! I suspect that the disgust I feel at Odysseus’ closing remark that he has suffered more is not universal…

“Then god-born Odysseus responded to him with a speech:
“Eumaios, you have really raised the spirit in my thoughts
By saying each of these things, how much you suffered grief in your heart.
But Zeus has certainly added some good to your trouble
Since you came and have worked much in the home of a mild man,
Who provides food and drink rightly. You live a good life
But I have come here after wandering through many cities of men”

So they spoke saying these kinds of things
And they stayed awake not much more, only a little.”

Q. “But Zeus did not give you only evil, but good too.”
H. “He added some good to your misfortune.”

“Neither Aiakos’s son Peleus
Nor godlike Kadmos had a secure life
For of all mortals they are said to have
Have received the highest blessing of mortals
Since they listened to the Muses with golden-headbands
Singing on the mountain and in seven-gated Thebes
When one married ox-eyed Harmonia
And the other married Thetis, the famous child of wise-counseled Nereus.
The gods feasted with both of them
And they say the kingly sons of Kronos
On golden seats, and accepted from theme
Bride-gifts. Thanks to Zeus,
They made their hearts straight again
From their previous suffering.

In time, however, [Kadmos’] three daughters
Stripped him of his share of joy
with piercing pains—
even though father Zeus went to the desirable bed
of white-armed Thuonê.

And Peleus’s child, the only one immortal Thetis
Bore in Phthia, raised the mourning cry
From the Danaans as he was burned
On the pyre, after he lost his life
To war’s arrows.

If any mortal keeps
The road of truth in mind
He must suffer and obtain well
From the gods. But from the high winds
Different breaths blow different ways.

Human happiness does not last long
safe, when it turns after bringing great abundance.
I will be small in small times and then great
In great ones. I will work out the fate
That comes to me always in my thoughts, ministering to it with my own devices.
But if god were to grant me great wealth,
I have hope that I would find the highest fame afterwards.
Nestor and Lycian Sarpedon, we know from the stories of men
From honeyed words which skilled artisans
Fit together. Virtue grows eternal through famous songs.
But few find this easy to do.” “The knowledge of man has countless forms—
whether learned in some prophetic art
or allotted the Graces’ honor,
the wise man certainly flourishes with golden hope.
Another man aims his dabbled bow at boys.
Others fortify their hearts in the field
Or with herds of cattle.
But the future bears ends that make the path of fortune
unmeasurable.
This thing is best: to be a noble man
envied by many men.
I know something about wealth’s great power:
It makes even the most useless man useful.
But why do I pilot my great tongue so
and drive off the road?
When the moment of victory is appointed for mortals,
only then the wise man must…[ ]
With flutes [pay back the favor of the gods]
And mingle [among those who may envy]

The last few lines of this poem are completely fragmentary. In italics I put in something just to complete the sentence. I think that the reference to flutes probably indicates some ritual celebration, but I also wanted the end to repeat the note of warning about the mutability of fortune. Any other suggestions?

Solon, (fr. 11 1-4) seems to echo Zeus’ comments from the Odyssey (that men are always blaming the gods).

“If you have suffered grief through your own wickedness
Don’t blame the gods for this fate.”

The later Presocratic Critias (fr. 10.3) is more explicit in his play Pirithous:

“Fortune is a friend to men of good sense.”

This is no Terminator ethic (“no fate but what we make”) but it is a long way off from oracular predestination!

“Men have one milestone, a single path for fortune:
To make it to life’s end with an unaggrieved heart.
And whoever harbors countless concerns in his thoughts
and wears down his spirit night and day over what’s to come
has a toil that bears no fruit.
What help is there for a man who drowns his heart
By grieving over the things he cannot change?”

The Late Medieval Duomo of Siena (Cattedrale Metropolitana di Santa Maria Assunta) is a mixture of Gothic and Romanesque styles–it has an impressive façade and is full (inside and out) of impressive artwork including sculptures by Michelangelo, Donatello and Bernini.

One of the floor mosaics that caught my attention as a classicist is the Ruota della Fortuna (“The Wheel of Fortune”) which communicates the mutability of fortune and is aimed at encouraging its viewers to turn to faith and work rather than relying on chance.

What is striking is that in the four corners of the mosaic are classical authors with short Latin quotations on the nature of fortune. The lines themselves are less interesting to me than the four authors who make the cut–none Christian, two Greek: Euripides, Seneca, Aristotle and Epictetus. Starting in the lower right-hand corner (if facing the altar), we find Euripides with a quote from the Elektra in Latin: Tibi dixi O Filii ut fortunam laboribus indages (“I have told you, son, to hunt fortune through labors”).

Across from Euripides on the left, our old friend Seneca, Magna servitus est magna fortuna (“Great fortune is a great slavery”): 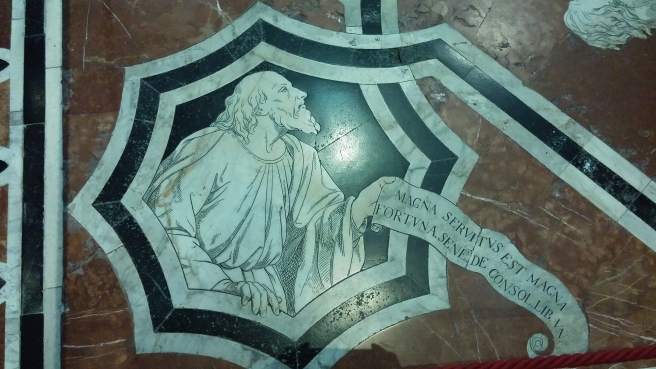 On the top right, Aristotle is positioned above Euripides with a quote from the Politics (also in Latin) Fortuna prospera petulantes magis facit (“Good luck makes men more petulant”):

And facing Aristotle on the left is Epictetus whose quote is Non fortunae muneribus, sed animi bonis gloriandum (“We must glory not in the gifts of fortune but in the goods of the soul”):

The images and quotations themselves are interesting, but I am also intrigued by how these authors and their lines were selected to adorn this cathedral. Was there a collection of quotations about fortune? Were the artists educated in these classical authors? What would have Medieval viewers thought?

“Perhaps it was also a better fate for him to die at the height of his reputation and when he would be missed by men before he could suffer that common human fate, which is the very thing Solon warned Kroisos about: that it is best to look to the end of even a long life and never to say openly that some man is fortunate before he is dead.”