The Fox and the Tragic Mask, Phaedrus 1.7

By chance a fox had seen a tragic mask:
What a sight, he has no brains inside!–he gasped.
To whomever fortune grants honor and glory,
It deprives of common sense, as in this story.

“A Goatherd once took his goats out to pasture. When evening was coming on, he saw the wild goats mixed with his own, and he drove them all to the same cavern. On the next day there was a great winter storm, and since he was not able to lead them out to the accustomed pasturage, he looked after them inside, tossing out a moderate portion of food to his own goats so that they would not feel hungry, and heaping up even more for the wild ones so that he could make them his own. Once the storm stopped, he led them out to the pasture, and the wild goats took to the mountains and fled. When the Goatherd began to upbraid their ingratitude, for taking an excessive portion of his kindness yet still leaving him, they turned to him and said, ‘But we are even more on our guard for that very reason. For if you esteemed us, who came to you yesterday, above those who had long been with you, it is clear that if others were to come to you after us, you would esteem them more than us.’

This tale makes it clear that we should not receive gladly the friendship of those who esteem us as newcomers more than they esteem their old friends; we should understand that as we spend more time with them they will give their friendship to others whom they will prefer above us.”

Fable IV – The Nightingale and the Hawk

The Nightingale, perched upon a high oak, was singing in its customary way. The Hawk, seeing the Nightingale and in need of food, flew down and seized it. As she was about to be carried away, she asked the Hawk to set her down, saying that she was not sufficient to fill the Hawk’s stomach; indeed, that the Hawk should turn its attention to bigger birds if it were really in need of food. The Hawk, taking up this argument, said, ‘But I would be stupid if I let the meal at hand go so that I could seek one that never appears.’

Thus are the foolish among mortals who let go of what is ready to hand through hope of greater things to come. 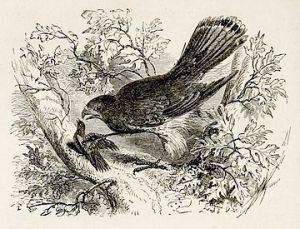 “An Eagle once flew down from a lofty rock and snatched a lamb. A Jackdaw saw this and jealously wished to imitate him. Sending himself down with a great whistle he landed upon a ram. He locked his talons into the ram’s wool, and unable to lift the ram, he beat his wings until a shepherd, seeing what was happening, ran up, grabbed the Jackdaw, and cut off his wings. When evening came, the shepherd carried them to his children. When they asked what sort of bird it was, he responded, ‘As I know clearly, he was a Jackdaw; but as he conceived it, he was an Eagle.’

Thus goes the struggle against those who exceed us: in addition to accomplishing nothing, one adds ridicule to misfortune.”

“The Eagle and the Fox once became friends and decided to live near each other, and they made this close acquaintance the confirmation of their friendship. The Eagle, mounting upon a huge tree, gave birth to its young. The Fox, arriving at the underlying brush, gave birth. One day, when the Fox was away in search of food, the Eagle was in need of nourishment, so it flew down to the brush, took the Fox’s offspring, and shared them as a meal among its own children. The Fox returned and, as she recognized what had been done, was not pained more by the loss of her children than by eagerness for vengeance. For, being a land animal, she was unable to pursue a winged one. On which account she stood far away and cursed her enemy, which is the only thing left to those who are lacking strength and power. But it so happened that the Eagle was not able to long ward off the punishment for its crime against friendship. For, while some people were sacrificing a goat in the field, it flew down and snatched the burning liver from the altar. Upon arriving at the nest, a great wind arose from the old fair breeze, and set a bright fire to the nest. On that account, the Eagle’s young were burned (their wings were not yet fully-grown) and fell to the ground. The Fox then ran up and devoured them in sight of the Eagle.

This tale makes it clear that those who break the bonds of friendship, even though they may seem to escape chastisement due to the impotence of their victims, will not then elude divine punishment.”

“There was a time when all the animals spoke the same language. A mouse who was on friendly terms with a frog, invited him to dinner and led him into a storehouse of his wealth where he kept his bread, cheese, honey, dried figs and all of his precious things. And he said “Eat whatever you wish, Frog.” Then the Frog responded: “When you come visit me, you too will have your fill of fine things. But I don’t want you to be nervous, so I will fasten your foot to my foot.” After the Frog bound his foot to the mouse’s and dragging him in this way, he pulled the tied-up mouse into the pond. While he drowned, he said “I am being mortified by you, but I will be avenged by someone still alive!” A bird who saw the mouse afloat flew down and seized him. The Frog went aloft with him too and thus, the bird slaughtered them both.

Note 1: ὁμόφωνα τὰ ζῷα, “common animal language”: It is unclear whether, in these halcyon days before the fall from linguistic harmony, a Frog would squeak or a Mouse would croak when in the other’s company.

Note 2: ἐμπλήσθητι τῶν ἀγαθῶν :”you will have your fill of good things”. If the Mouse knew his Pindar (῎Αριστον μὲν ὕδωρ, 1.1), he would suspect that the Frog will do what in fact does, which is to fill his lungs with water. This illustrates that good things are in fact relative. A Mouse and Frog will hold different things dear.