I have been very often disappointed of late Years, when upon examining the new Edition of a Classick Author, I have found above half the Volume taken up with various Readings. When I have expected to meet with a learned Note upon a doubtful Passage in a Latin Poet, I have only been informed, that such or such Ancient Manuscripts for an et write an ac, or of some other notable Discovery of the like Importance. Indeed, when a different Reading gives us a different Sense, or a new Elegance in an Author, the Editor does very well in taking Notice of it; but when he only entertains us with the several ways of spelling the same Word, and gathers together the various Blunders and Mistakes of twenty or thirty different Transcribers, they only take up the Time of the learned Reader, and puzzle the Minds of the Ignorant. I have often fancied with my self how enraged an old Latin Author would be, should he see the several Absurdities in Sense and Grammar, which are imputed to him by some or other of these various Readings. In one he speaks Nonsense; in another, makes use of a Word that was never heard of: And indeed there is scarce a Solecism in Writing which the best Author is not guilty of, if we may be at Liberty to read him in the Words of some Manuscript, which the laborious Editor has thought fit to examine in the Prosecution of his Work. 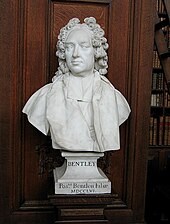