As soon as dinner was ended, Jones informed the company of the merriment which had passed among the soldiers upon their march; “and yet,” says he, “notwithstanding all their vociferation, I dare swear they will behave more like Grecians than Trojans when they come to the enemy.”—“Grecians and Trojans!” says one of the ensigns, “who the devil are they? I have heard of all the troops in Europe, but never of any such as these.”

“Don’t pretend to more ignorance than you have, Mr Northerton,” said the worthy lieutenant. “I suppose you have heard of the Greeks and Trojans, though perhaps you never read Pope’s Homer; who, I remember, now the gentleman mentions it, compares the march of the Trojans to the cackling of geese, and greatly commends the silence of the Grecians. And upon my honour there is great justice in the cadet’s observation.”

“D—n Homo with all my heart,” says Northerton; “I have the marks of him on my a— yet. There’s Thomas, of our regiment, always carries a Homo in his pocket; d—n me, if ever I come at it, if I don’t burn it. And there’s Corderius, another d—n’d son of a whore, that hath got me many a flogging.” 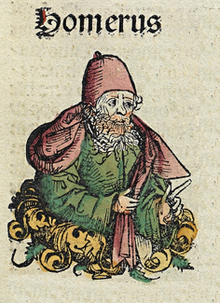 One thought on ““Damn Homer With All My Heart!””