Not long ago I sent round to the library to see what they had by Ausonius. The slave returned with a wheelbarrow full of books. Ausonius must be read to be believed! As poet, no subject is too trivial for him; as courtier, no flattery too excessive. He did write one passable nature poem on the Moselle, but I’m not keen on rivers. The rest of his work is quite marvellous in its tedium. Particularly those verses he wrote at Valentinian’s request. Among the subjects chosen by the Emperor were the source of the Danube (Ausonius did not locate it but he made a good try), Easter, and (best of all) four odes to the Emperor’s four favourite horses. I had one of these equine odes copied out and Hippia reads it to me whenever I am depressed. It begins “Oh raven steed, whose fortune it is to spread the golden thighs and Mars-like firm convexities of divine Augustus…” I don’t know when I have enjoyed a poem so much. I’ll enclose a copy. Anyway, I suggest you see Ausonius as soon as possible. And of course you will remember to express admiration for his work! In a good cause hypocrisy becomes virtue. 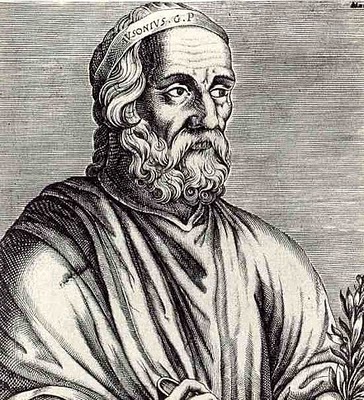