Astuanassa: A handmaid of Helen, Menelaos’ wife. She first discovered positions for intercourse and wrote On Sexual Positions. Philainis and Elephantinê rivaled her in this later—they were women who danced out these sorts of wanton acts.

We have learned about this embroidered girdle, that Hera took it from Aphrodite and gave it to Helen. Her handmaid Astuanassa stole it but Aphrodite took it back from her again.

Astuanassa: A handmaiden of Helen and the first to discover Aphrodite and her licentious positions. 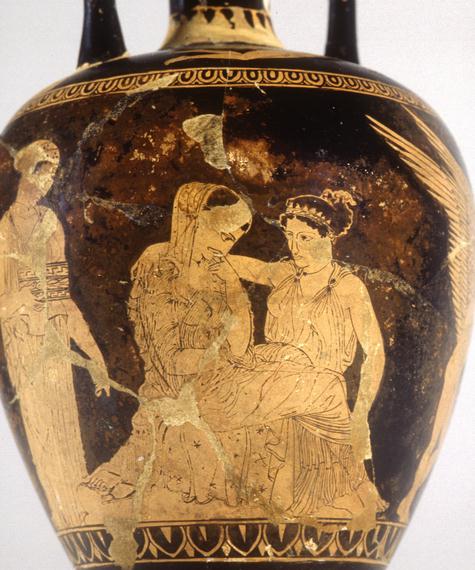 As is largely unsurprising from the perspective of Greek misogyny, excessive interest in sexual behavior is projected a female quality. Expertise beyond interest is made the province of female ‘professionals’ (slaves) who may act as scapegoats and marginal figures for the corruption of both men and women. There is a combination of such interest with an excessive emphasis on eating (and eating really well) in Athenaeus where the pleasures of the body are combined.

“Dear men, even though I have great admiration for Chrysippus as the leader of the Stoa, I praise him even more because he ranks Arkhestratos, well-known for his Science of Cooking along with Philainis who is credited with a licentious screed about sexual matters—even though the iambic poet of Samos, Aiskhriôn, claims that Polycrates the sophist started this slander of her when she was really quite chaste. The lines go like this:

“I, Philainis, circulated among men
Lie here thanks to great old age.
Don’t laugh, foolish sailor, as your trace the cape
Nor make me a target of mockery or insult
For, by Zeus and his sons in Hell
I was never a slut with men nor a public whore.
Polykrates, Athenian by birth,
A bit clever with words and with a nasty tongue,
Wrote what he wrote. I don’t know anything about it.”

But the most amazing Chrysippus combines in the fifth book of his On Goodness and Pleasure that both “the books of Philianis and the Gastronomiai of Arkhestratos and forces of erotic and sexual nature, and in the same way slave-girls who are expert at these kinds of movements and positions and who are engaged in their practice.” He adds that they learn this type of material completely and then thoroughly possess what has been written on these topics by Philainis and Arkhestratos and those who have written on similar topics. Similarly, in his seventh book, he says ‘As you cannot wholly learn the works of Philianis and Arkhestratos’ Gastronomia because they do have something to offer for living better.’ “