“The rules and observations of the rhetorical art are highly useful, if they are sound, to lead the mind to perceive and feel the inspirations of genius, and the corrections of judgment; and to show the correct, and check the perverted use of its own faculties. But it must not stop there. It must go to the fountains; it must learn of the original masters; it must peruse the great authors and there it must be nourished, and cherished, and replenished, invigorated, and stimulated to exert its own powers, and put forth its own productions. From them the laws of Rhetoric were first derived. This art was not first formed as a mould, in which their works might be cast. It may well assist to form the taste and direct the judgment of the aspirant. But it is not enough for him to have studied the art; he must also, and chiefly, find the materials and their use m the best authors, and in his own mind. And in these sources, with his art, he may by habit acquire both matter and form.

The soul of genius works its own way, and makes its own laws, and gives laws to others. It may be corrected; it may be improved. But, I imagine, it was hardly conscious to itself of half the principles and purposes, which are ascribed to it by the critical reader. Yet it had them, and it used them, and produced the effects, and sent them forth to the world, by the spontaneous operation of the .mysterious powers of the human mind. If the superiority of the earlier over the later poets, in point of genius, be justly asserted, one great cause may have been, that they wrought fervently in liberty and passion; but their successors labored humbly and timidly in chains and fetters under a severe dominion. Yet Homer was not the first of his line, but the acme of an ascending order of poets, as Olen, and Linus, and Orpheus, and others known and unknown. It is said, there were schools in his day, and chiefly schools of poetry, and he was a Master. Every palace of Homer, or of Homer’s kings, had its divine poet, θεῖος ἀοιδός; and Achilles in his tent and in his wrath sang the glories of men to his harp. The dawn and the morning precede the rising sun; and the light arose on the darkness of chaos, before the central orb shone forth from the heavens.” 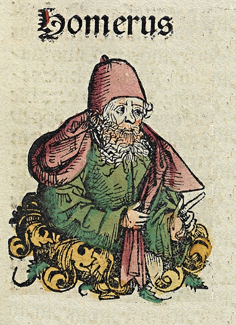