“Even though the great accomplishments of Sergio’s virtue are clear in these deeds, the impact of fortune is greater. I do not think that anyone can justly rank any person higher than Marcus Sergius—even with his great-grandson Catiline undermining his name.

Sergius lost his right hand in his second expedition; in two campaigns he received twenty-three wounds and even though he was disabled in both hands and both feet, his spirit was still whole and he still served on many campaigns despite his disabilities. He was captured twice by Hannibal—for he was no regular enemy at all—and escaped twice from his chains even though he was guarded in bonds or shackles every day for 20 months.

He fought only with his left hand four times and had two horses he was riding on killed under him. He made an iron right had for himself and with that tied on, he ended the siege at Cremona, rescued Placentia, and seized twelve hostile camps in Gaul. All these exploits are told in his speech during his quaestorship when his senatorial colleagues wanted to expel him from the sacrifices because he was disabled—this man who would have made a heap of wreaths had he faced a different enemy. How much a difference the times in which your virtue emerges matters! What civic rewards were offered by Trebbia, Ticinus or Trasimine? What crowns were earned after Cannae, where the greatest virtue was flight? Others were victors over men, only Sergius conquered fortune.” 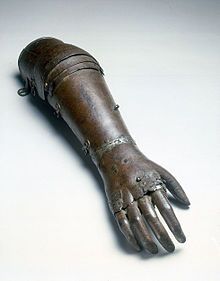 As the amazing Dr. Liv Yarrow recently let me know, there is a coin commemorating Sergius. Check out her post. She also wrote an awesome follow-up.