The Odyssey follows the slaughter of the suitors with the mutilation and murder of slaves: the torture of the goatherd Melanthios (Od. 22.474–477) and the hanging of twelve slave women (Od. 22.463–73). But it also considers the death of the older slave Eurykleia on multiple occasions. We first hear about her in book 1:

“And with him Eurykleia carried the burning torches.
She knew proper things, the daughter of Ops, the son of Peisênor
whom Laertes bought to be among his possessions
when she was just a girl and he paid a price worth 20 oxen.
And he used to honor her equal to his dear wife in his home
but he never had sex with her and he was avoiding his wife’s anger.”

So, it seems, Eurykleia’s life is ‘dear’—in the archaic English meaning of having a high price—since she was worth so many oxen and Laertes honored her equal to his wife without having sex with her. Despite so high a price—or perhaps because of it—her life is risked several times in the epic. The moment that has always stuck with me comes from the famous recognition of the scar scene. While this scene has garnered a lot of attention for the way the scar triggers a story and communicates Odysseus’ identity, there have been relatively few comments about the violence imminent in the scene.

“The old woman, as she took it in the flat part of her hands,
recognized the scar as she felt it, and she dropped the foot.
His shin fell onto the basin and the bronze clanged,
then it tilted to one side and water sloshed out onto the ground.
Joy and pain overtook her mind at once and
both of her eyes filled with tears as her strong voice got stuck inside.
She touched his beard and then addressed Odysseus.
“You really are Odysseus, dear child.
I did not recognize you before, before I examined my lord all over.”

And then she would have gotten Penelope’s attention too
with her eyes because she wanted to tell her
that her dear husband was here.
But she was not able to turn or to notice anything
because Athena had turned her mind elsewhere.
But Odysseus closed his hand on her throat with his right hand
and with his left hand he drew her close and said,

“Auntie, why do you want to ruin me?
You fed me yourself on your own breast.
Now after suffering many pains I have returned
in the twentieth year to my fatherland.
But since you have recognized me and a god put it in your mind
be silent lest anyone else in the home learn it.
For I will speak this out and it will be completed,
If the god subdues the haughty suitors under me
I will not leave you even though you were my nurse,
when I kill all the other slave women in my home.”

This theme is internalized later when Eurykleia threatens her own life.When she tries to tell Penelope in book 23 that Odysseus is actually present, she offers to wager her life on the truth of the statement when Penelope doubts her.

“…I wanted to tell you myself
but he took me with his hands at my throat
and would not allow me to speak thanks to the cleverness of his mind.
So, follow me. But I will wager myself over this to you:
If I have deceived you, kill me with the most pitiful death”

For me, Eurykleia’s willingness to wager her life is indication of an internalized oppression created by the experience of slavery. But the specific value of her initial price is interesting too. This probably complicates matters, but there is little in the Homeric poems set at a worth of 20 oxen. The price comes up again during the slaughter of the suitors. Eurymachus tries to offer Odysseus recompense and sets the price for each suitor at 20 oxen (in addition to payment for all the food and drink).

“But now, even though it is ordained by fate, spare your people.
And in exchange we will gather about the land as payment
As much as was drunk up and eaten in your halls,
And each man will bring a payment worth twenty oxen,
Which we will pay in bronze and gold, until your heart
Softens—before this, there is no blame for being angry.”

Post-script: An average ox seems to cost around $3000.00 right now. So, in modern ox-dollars, Eurykleia was valued at $60,000. This seems a little off to me. According to Beef Magazine (which is a real thing) a good bull on average can run more like $7500, placing Eurykleia at $150,000. I do not print any of this to make light of the selling of human beings (because, when we leave the abstract, this is all really horrifying), but instead, rather, to give a really relative view of what her–and the suitors–economic value might be in today’s terms. The range is basically luxury car to cheap apartment. This is, alternatively, the price acceptable for a good slave, but not worth the life of an offending suitor. In both cases the economic equivalence for any human life is, to put it simply, dehumanizing. 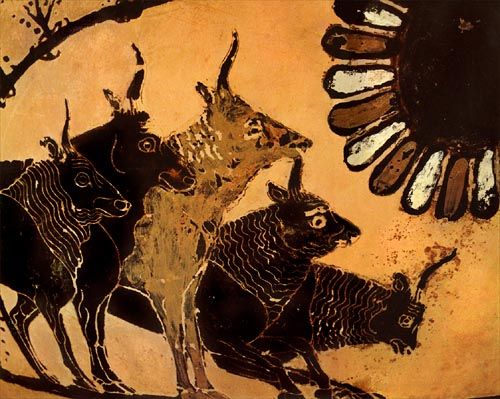 One thought on “What’s a Slave’s Life Worth?”