Having briefly traced the history of the word φιλόλογος, we may now deal no less briefly with the two terms which in modern Latin, and in French and German, it has ultimately superseded, the terms γραμματικός and κριτικός.

In the golden age of Greek literature the common meaning of γράμματα is ‘letters of the alphabet’, and γραμματικός is applied to one who is familiar with those letters, knows ‘their number and their nature’[1]; one in short who has learnt to read[2]. In the same age τέχνη γραμματική is simply the art of γρἁμματα[3], the art of reading[4]. Not in the same age only, but in all later ages, γραμματιστής is a teacher of γρἁμματα, a teacher of reading and writing[5]. The Latin term corresponding to γραμματιστής is litterator[6]

In the earlier time γράμματα seldom means ‘literature’[7]; but it is to this sense of the word that we owe the new meaning given to its derivative γραμματικός in the Alexandrian age. That new meaning is a ‘student of literature’, especially of poetical literature; and similarly γραμματική now comes to mean the ‘study of literature’, especially of poetry. γραμματική in this new sense of the term is sometimes said to have begun with Theagenes of Rhegium (fl. 525 B.C.), who was the earliest of the allegorical interpreters of Homer[8]. When Plato is described as the first who speculated on the nature of γραμματική[9], we may assume that the reference is to the Cratylus, a dialogue in which he discusses the nature of words. Aristotle is similarly described as the founder of the art of γραμματική in that higher sense which implies the learned study of poetic literature[10]. But this is only the language of later writers, and we may be sure that neither Theagenes nor Plato nor Aristotle would have described himself as γραμματικός, except in the sense applicable to all who could read and write.

The first who was called γραμματικός in the new sense of the term was a pupil of Theophrastus, the Peripatetic Praxiphanes of Rhodes (fl. 300 B.C.), the author of certain works on history and poetry. According to another tradition, the first who received this designation was Antidorus of Cumae, who wrote a treatise on Homer and Hesiod, and also a work on Style, and may be placed very early in the Alexandrian age. After the time of Antidorus, we find Eratosthenes giving the title γραμματικά to two of his works, but their contents are unknown[11]. Dionysius Thrax (bom about 166 B.C.), in the earliest treatise on Grammar now extant, defined γραμματική as being ‘in general the practical knowledge of the usage of writers of poetry and prose’[12]. He divided it into six parts: — (i) accurate reading, (2) explanation of poetic figures of speech, (3) exposition of rare words and of subject-matter, (4) etymology, (5) statement of regular grammatical forms. These five parts form the ‘minor’ or ‘imperfect’ art of Grammar, the ‘perfect’ art including: (6) ‘the criticism of poetry, which is the noblest part of all’[13] A better subdivision gives us only four parts, (i) correction of the text, (2) accurate reading, (3) exposition, (4) criticism[14]. Dionysius of Halicarnassus twice describes τὴν γραμματικὴν as including the art of reading and writing and the art of grammar, without extending its meaning to literary criticism[15].

In the Roman age the Alexandrian meaning of γραμματικός is noticed by Suetonius who makes the borrowed word grammaticus synonymous with the Latin litteratus[16]. He adds that Cornelius Nepos agrees with this view, and regards litterati and grammatici as equivalent to poetarum interpretes. Similarly Cicero treats grammatica (neuter plural) as synonymous with studium litterarum[17]and includes in its province poetarum pertractatio, historiarum cognitio, verborum interpretatio, pronuntiandi quidam sonus[18]‘. Elsewhere he describes grammatici as interpretes poetarum[19]. Just as Cicero identifies the science with studium litterarum, so Quintilian describes it as sometimes translated by litteratura[20], and as including disquisitions on style and subject-matter, the explanation of difficulties and the interpretation of poetry[21]. He divides it into two parts, (i) ‘the science of correct language’, (2) ‘the interpretation of poetry[22]; the former, he adds, must include ‘correct writing’, and the latter must be preceded by ‘reading aloud with correctness’. It thus embraces correct reading and correct writing, and, beside these, criticism, which detects spurious lines or spurious works, and draws up select lists of approved authors[23]. Seneca, as an adherent of the Stoic philosophy, which had paid special attention to Grammar, uses grammaticus in a somewhat narrower sense[24]. He also compares the different lights in which Cicero’s treatise de Republica is viewed by a philosophus, a philologus and a grammaticus. While the philosophus wonders that so much can be argued on the side contrary to that of Justice, the philologus notices that, of two kings of Rome, the father of the one (Ancus) and the mother of the other (Numa) were unknown; also that Romulus is said to have perished during an eclipse of the sun, that the dictator was formerly called the magister populi, and that there was a provocatio ad populum even in the time of the kings, ‘as Fenestella also holds’. But the grammaticus (he continues) notices (i) verbal expressions, such as reapse for re ipsa, (2) changes in the meaning of words, as the use of calx for creta, of opis pretium (in Ennius) for operae pretium, (3) the phrase caeli porta, borrowed by Ennius from Homer, and itself borrowed in turn by Virgil[25]. Lastly, when Aulus Gellius (fl. 150 A.D.) wished to ascertain the meaning of the phrase ex iure manum consertum, he applied to a grammaticus, who professed to expound Virgil, Plautus and Ennius, but (as it happened) was quite unaware that this legal phrase was actually found in Ennius[26]. Thus it appears that, in and after the Alexandrian age, γραμματικός mainly implied aptitude in the study and interpretation of poetry, and γραμματική included not only Grammar but also (in its higher sense) the criticism of the poets. 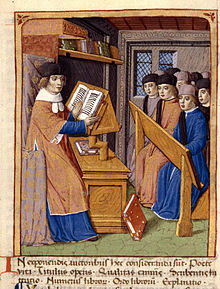 One thought on “γραμματικός – The Birth of Literary Criticism”